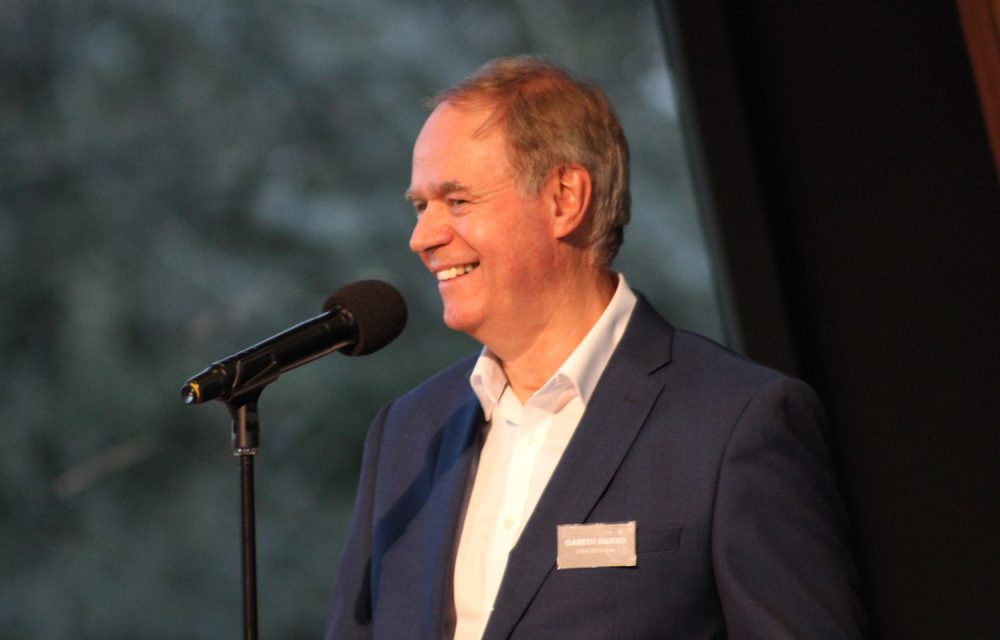 Our Cardiff office celebrated its 20th birthday this week with a party at the Welsh College of Music & Drama, whilst also marking the retirement of founding director, Gareth Davies, who will leave at the end of 2016.

Originally Gareth Davies Associates, the practice was established as Stride Treglown in 1996. We now have a staff of 40 architects, town planners, landscape architects and building surveyors with a turnover of some £3.5 million, becoming one of Wales’s largest practices.

The office built its own carbon neutral home, Treglown Court, in 2010, which was the first office building in the UK to achieve a BREEAM ‘Outstanding’ design rating. The carbon saving measures have enabled us to save 37 tonnes of carbon emissions, equivalent to 133,000 car miles. This will be augmented by the recent introduction of our new electric pool car.

The team has been responsible for a series of notable projects in the country with particular strengths in schools, higher education, housing and health. Recently completed projects include three schools in Swansea and four science buildings on the new Swansea University Science and Innovation Campus. Projects under construction include Ysgol Bae Baglan, the flagship new secondary school in Port Talbot, Cardiff’s new STAR Leisure Centre and three student accommodation schemes in Cardiff at Dumfries Place, Howard Gardens and Capital Quarter.

Current designs include the new University of Wales Trinity St David’s campus in Swansea and the roll out of new Cancer Diagnostic Treatment Centres throughout England.

“Everyone at Stride Treglown would like to congratulate our Cardiff office on reaching this significant milestone. The office has been extremely successful in the 20 years since its formation and we look forward to this continuing for many years to come.

“I would also like to thank Gareth for his skills and commitment in helping forge this success. He will be much missed and we all wish him well for his much-deserved retirement”.

“Since becoming part of Stride Treglown in 1996, the office has gone from strength to strength. This is down to the high quality of staff that I’ve had the privilege of working with and I’d like to thank them for their significant contribution. A number of the team are also celebrating 20 years with the practice, which speaks volumes about Stride Treglown as a place to work.”

We recently launched 431 Architecture, an alliance with Keppie Design and Todd Architects to offer clients an even greater spread of expertise and geographic coverage, with access to 500 staff in 18 offices throughout the UK.

We've been selected for our commitment to putting purpose ahead of profit. Find out more...