Phil led the design and delivery of Ysgol Bae Baglan, winner of the Eisteddfod Gold Medal for Architecture, 2017. Rumour has it he’s still wearing the gold medal.

Phil leads the concept design for major education projects in our Cardiff office. He has worked across most design sectors and his expertise brings a valuable input to the complexity that school design demands.

Interesting fact that nobody knows about you?

I am also a graduate from a school of mechanical engineering, so I could become a Chartered Engineer. I was always going to be an architect, but I wanted to know more about the scientific side of designing buildings rather than having to rely on mechanical engineers too much. I now have a better feel for their work and can interrogate them more than other architects can.

Why did you choose a career in architecture?

I enjoy a challenge. I always wanted to be an architect from the age of 7. I enjoy building things, so it feels like a very natural career for me to follow. I enjoy both the science and the art side of it. That’s what architecture is all about.

What is the role of an architect?

We are problem solvers; there is always a solution. Also, we have to be able to communicate, which we can do in so many different ways – talking, drawing, writing and by making models. Now that we have access to virtual reality, I want to take things further and immerse people in the concept; allow them to feel, hear and experience the spaces I’ve envisioned.

What advice would you give your 20 year old self?

Life as an architect will be very tough at some points, but persevere. The rewards are heart-warming and you will be able to deal with just about anything they throw at you.

Receiving a Gold Medal for Architecture in 2017, on behalf of Stride Treglown for Ysgol Bae Baglan School. 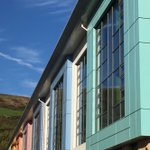 Great news. Proud to let you all know that our designs for Ysgol Cwm Brombil and Ysgol Bro Dur are shortlisted in this year’s CEW Awards and ... our clients for these schools, Neath Port Talbot CBC, are also shortlisted in Client of the Year in the CEW Awards.
Had a great time at the SEEDS conference over the past two days.
She was playing hide and seek with Trumpo!
I’d love to hear the Queen’s internal monologue during this. Do we think Trump didn’t read the brief, perhaps?

Fancy catching up with Pierre in London? Here's how to get in touch.

It's one of the first schools to be delivered through the DfE’s MMC1 Framework. Find out more...

This shortlist recognises Toni's important contribution to the South West property industry over the last 12 months.