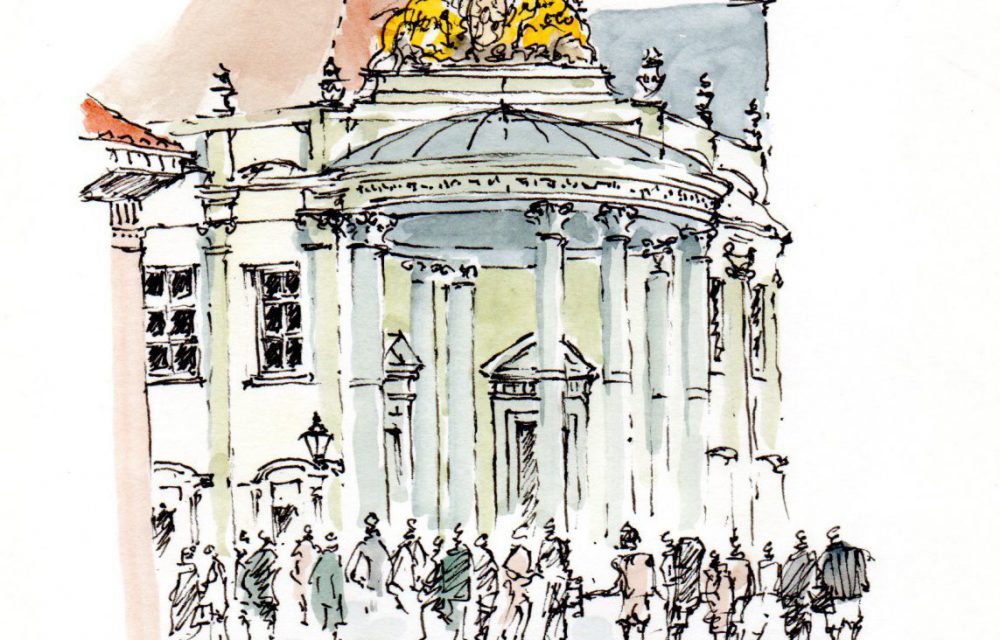 Stride Treglown are sad to announce the passing of John Bracey who joined the practice in 1979 from the South Western Regional Health Authority.

He was tasked with setting up our Plymouth Office which under John’s leadership grew and prospered. John became a well-known and respected local figure not only for his design talent but also his larger than life character, epitomised by his colourful dress sense, charm and genuine sincerity.

John was a talented architect and was responsible for the design of many buildings in Devon and Cornwall. These included projects for Royal Mail, the Ministry of Defence, Health Authorities, Housing associations and Commercial and Industrial premises. Of note was the Gunnery School at HMS Cambridge which John and his team won the commission for, following a design competition in the early 1980’s. The Gunnery School not only had a very stringent technical brief but also had to blend into its coastal location and it subsequently won a concrete society award.

John always enjoyed designing healthcare schemes, and one of the last major projects he worked on prior to his retirement in 1996 was the phase 5 extension to Treliske Hospital in Truro. This at the time was the largest healthcare project that the practice had ever undertaken, and it was secured and delivered due to Johns wide-ranging experience and knowledge of healthcare design.

Scypen, John’s family home in South Devon epitomised his design philosophy and was Highly Commended in the Arnold Sayers Award for Housing. It was a carefully considered blend of the existing barn with a new modern extension. It was surrounded by a magnificent garden with unique landscape features that he and his wife Ann enjoyed creating and adding to over the years.

John was past Chairman of the Plymouth Branch of the RIBA and the Devon and Cornwall Faculty of Building. After his retirement John retained his interest in and played a very active part in the local construction industry. He was one of the founding members of the Building Forum for Devon and Cornwall of which he was president. Their website provides a further tribute to John and his character. (www.tbfdevonandcornwall.com)

He was an accomplished water-colour artist and when he retired he was able to combine this with his love of travelling abroad. He often sketched the places he visited and these would subsequently feature on the family’s annual Christmas card.

John inspired us with his love of architecture and life and he genuinely cared about everyone he had worked with at Stride Treglown. Even after his retirement he would occasionally pop into the Plymouth Office to keep a benevolent eye on how we were all doing.

John Bracey will continue to be fondly remembered by past and present staff within the practice along with the many colleagues he worked with in the South West construction industry.

The world is a different place. We’re all adapting to a new way to work and live. Here's what we're doing.

Laurence Reilly joins us as Head of Design Management

Here we explain his plans for gearing our offer more closely to the needs of contractors.

Cora is able to offer specialist, experienced advice that puts clients in control of their construction projects.

The strength of our relationships is what will get us through says Rachel Bell.

Adopting DfMA takes a change of mindset but if you commit you’ll reap the rewards.

We are committed to climate action

Robert Delius
We use cookies to ensure that we give you the best experience on our website.OkRead more