Our gender pay gap has decreased for the fourth consecutive year showing that our interventions are continuing to have a positive effect. This trend is due to the constructive involvement of our employees and board members contributing ideas and suggestions through our Inclusion & Diversity Group, Employee Forum, and our Social Values Group. The process of improving our gender pay gap remains a continual process of analysis and intervention, even during changing world events.

Due to the pandemic, this year’s report is slightly different to previous reporting. In April 2020, Stride Treglown had 31 employees on furlough (c. 10% of our workforce) under the government’s Coronavirus Job Retention Scheme (CJRS).

These individuals were placed on furlough either at their request due to coronavirus having an impact on their caring responsibilities, or at our request if we identified a reduction in their workload. We paid all our furloughed colleagues 80% of their gross salary during all forms of furlough during 2020.

For additional transparency however, we have also reported our gender pay gap as if none of our staff were furloughed. We believe that this gives a more accurate picture of our underlying progress towards closing the gap.

Excluding those on furlough

Including those on furlough

Stride Treglown’s Architects who are 30 and under 2020 demographic.

ARB UK Register Architects who are 30 and under 2019 demographic.

On the 20th March 2020 the government announced the Coronavirus Job Retention Scheme (CJRS) which was designed to help organisations to furlough employees who had seen a reduction in work load or couldn’t work during the coronavirus pandemic. The CJRS has had different iterations during 2020 and 2021. The scheme has been primarily aimed at avoiding redundancies during the pandemic.

On the 30th March 2020 we released a Q&A to our employees to explain what furlough involved and why we might ask individuals to be placed on furlough if we saw a reduced workload. From this point onwards we have had individuals who came forward to request furlough in response to pressures on their own home lives (e.g. caring responsibilities) and we also asked individuals to take furlough, and later flexible furlough, to respond to project demands during an uncertain period.

In April 2020 61% of those placed on furlough were female and 39% male. These individuals are required to be excluded from our official pay gap reporting. These exclusions have artificially decreased our gender pay gap by a percentage point compared to reporting on everyone employed by the company at that time.

Further analysis shows that we requested a larger proportion of female employees to go onto furlough compared to our male employees.

Approximately half of the female employees we asked to take furlough worked in our administrative teams. This is because in April 2020 we identified a reduced workload for our administrators as we saw a dip in project workload and physically closed our offices in March for the first lockdown.

The remaining female and male colleagues on furlough were predominantly fee-earners.

During the year, the number of individuals on furlough fluctuated depending on project work and deadlines. By the end of October 2020 all our employees had returned to their preferred working hours.

Like many companies associated with the construction industry, our average gender pay gap is primarily caused by having fewer women at senior grades in our business.

Increasing female representation in senior roles and grades constitutes a major focus for our efforts in reducing our gender pay gap.

What we’re doing about it

We continue to take steps to help all employees fulfil their potential by minimising some of the obstacles to career progression.

Our Board of Directors, Inclusion and Diversity group, and Employee Forum have worked together to understand ways in which we as a business can improve our gender pay gap and inclusive culture. Since our 2019 gender pay report we have:

Since our 2019 gender pay report we have:

Our mean and median hourly pay gap has continued to decrease since reporting started in 2017. The overall difference between men’s and women’s hourly pay based on a snapshot on the 5th April 2020 is 15.3% (mean) and 18.9% (median). These percentages exclude those individuals on furlough or other forms of reduced pay.

If we include those on furlough our overall differences between men’s and women’s hourly pay, based on the same snapshot, is 16.5% (mean) and 20.0% (median).

When we compare pay for equal or similar work across our organisation the gap is significantly lower. However, factors such as our geographic spread, our broad range of consultancy expertise and relatively small size when compared to other organisations reporting make direct like for like comparison of pay equality difficult.

Hourly Pay gap
(April 2020 including those on furlough) 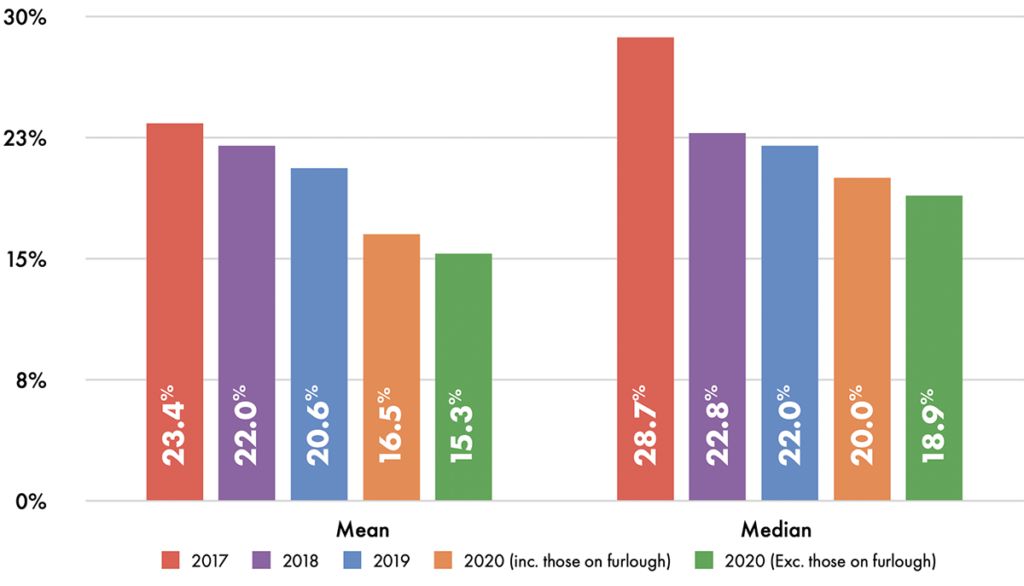 Pay Quartiles based on hourly pay – Percentage of Male and Female Employees in the different pay bands (A to D).
(April 2020)

Pay quartiles (excluding those on furlough)

Pay quartiles (including those on furlough)

The difference in bonus pay between men and women during the year April 2019 to April 2020 reflects the way in which a proportion of profit is distributed as bonuses, among equity directors, the majority of whom are male.

The difference between mean and median bonus pay gap figures reflects the proportion of profit distribution to the equality directors. The majority of whom are male.

Bonus Pay Gap (including those on furlough)

Bonus eligibility represents a snapshot from 2019 to 2020. All staff are eligible for a bonus if they have been here during the previous financial year. These numbers represent a period where certain members of staff were new to the company.

In this period 12.0% of male employees and 15.6% of female employees (if we exclude those on furlough) were ineligible for bonuses as they were new arrivals to the business. This explains the differential in eligibility percentages for the year.

If the same number of male and female employees had joined the business during this period, there would have been no differential.

Eligibility for Bonus (Excluding those on furlough)

Eligibility for Bonus (Including those on furlough)

The directors of the practice, both male and female, are paid at the same level. Their individual salary is 6 times that of the lowest paid employee at full time equivalent (FTE).

In accordance with The Equality Act (2010) (Gender Pay Gap Information) Regulations 2017. I confirm the gender pay gap data contained in this report for Stride Treglown Limited is accurate and has been produced in accordance with the guidance on managing gender pay developed by the Arbitration and Conciliation Service (ACAS).

Download as PDF
We use cookies to ensure that we give you the best experience on our website.OkRead more