Ever imagined the wonders you’d experience cycling the length of the UK? The breathtaking views. The quaint villages. The Scottish distilleries. Or perhaps you’re interested in the number of Greggs en route? Allow Ian Parkes to guide you on this iconic journey as he logs the Bath studio’s virtual End-to-End cycle. 8 riders, 30 days, 971 miles – here’s how they fared…

Parkes sets off, 130 miles by road from Land’s End. Weird and bleak – West Cornwall suits him. Chased out of Camborne for singing the song too loud. Stops for a pint at the Blisland Inn, the second best pub in the world. Crosses into Devon, but legs give out north of Dartmoor. Tags in Bell.

Bell smashes out 24 Spinning miles. Puddington is a let-down, not made of pudding. Passes the baton to Rhodes before nipping over to the Exmoor Dark Sky Reserve to look at the moon or something?

Rhodes puts in a healthy 74 miles on the e-bike. Cruises into Somerset, points and laughs at the sign for Westonzoyland. The Levels are just that, so they barely count. Drinks 14 pints of Janet’s Jungle Juice and calls it a day.

Colvin tags in with 12 commuter miles. Serious climb up the Mendip Hills and everyone claps him at the top. Stops for a picnic, enjoying the view.

Murphy closes out the week doing 42 miles on a bike held together with string and tape. No Wetherspoons in Avonmouth, but it does have a Greggs and a Subway so it’s not a complete waste of space. Wheels fall off in the middle of nowhere, somewhere in Gloucestershire. 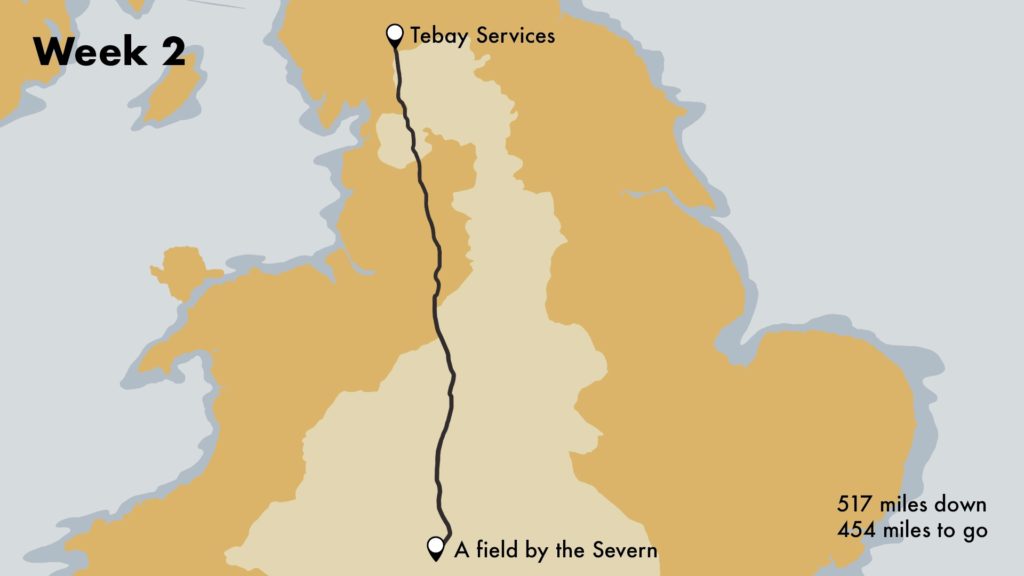 Bell picks up the baton from Murphy (still in a field by the Severn) opening the ride with 24 miles. Liberates ducks (water chickens) from Slimbridge on her way to watch the Bore. Tags out in Gloucester. No. Greggs passed: 2

Judd joins in, fresh from a roll down Cooper’s Hill. 34 miles between cathedrals. Cruises into Worcester after taking a break on the massage chairs at Strensham Services. No. Greggs passed: 5

Gaston joins the team for 33 miles. Droitwich thinks it’s a spa town, but it’s not kidding anyone. Lido looks nice though. Steers away from Frankly Services, the saddest place in the world. Signpost for Lickey End makes him laugh. Finishes in Wolverhampton, for which I’m sorry. No. Greggs passed: 9

Parkes tags in with 84 miles. The Potteries are lovely but Jodrell Bank is better. My only good school trip, pretty much the high point of the ‘80s. Manchester puts an old Scall on edge, but I’ve never turned my nose up at an Eccles cake. No. Greggs passed: 17

Rhodes brings another 68 miles. Snacking on Bury black pudding, the finest blood sausage in all the land. Passes signs for Wham and Giggleswick. Ribblehead Viaduct looks nothing short of magnificent. Like the rider, it is stable, understated and inspires awe in all who behold it. Unlike the rider, it is tall. No. Greggs passed: 9

Colvin adds another 6 miles. Yorkshire Dales are pretty, but empty. Sooo empty. The Dent Beer and Music festival looks like the social event of the season. I’ve written text messages longer than the Gawthrop Wikipedia page. No. Greggs passed: 0

Murphy finishes off the week, distraught at his Greggs-less journey into Cumbria. Manages 14 miles before it all gets too much for him. Rolls over to Tebay Services hoping for a KFC, flips a table when he finds they only have a farm shop. No. Greggs passed: 0

1 Greggs every 6¼ miles. Makes you proud.

Rhodes starts the lead with 46 miles, powered by Kendal Mintcake and National Trust tea. Has us hounded out of Penrith for screaming “We want the finest wines available to humanity, we want them here and we want them now!” to random strangers. Lands in Carlisle, where the council still believes in curses.

Bell takes up the baton with a further 24 miles. Crosses Hadrian’s wall at pace, taking the ride to a whole new country. Passes Gretna Green, wondering what the heck the Devil’s Porridge Museum is about. Veers off track to spoil a perfectly nice walk at the Southerness Golf Club – 45th best in Scotland!

Gaston tags in for another 29 miles. Passes through Moffat, second spa town in 2 weeks. Smells of farts, but at least it’s not Droitwich. Takes a breather at the Elvanfoot Suspension Bridge. Good bridge country.

Judd adds another 31 miles. So many miles, so little to talk about. No Lamingtons in Lamington. You know you’re in the middle of nowhere when Wikipedia lists the abandoned buildings to pad out the page. Stops in Auchengrey, mostly out of boredom.

Parkes takes over with 64 miles. Edinburgh Rock is even worse than the mintcake, but the Fourth Bridge is magnificent (big fan of Hitchcock’s The 39 Steps). Apparently wigeons are a thing and they live on Loch Levan. Disappointingly, no bridge in Bridge of Earn. Makes it as far as Perth, which I thought would be warmer.

Murphy has a better week, closing the ride with 48 miles after finding Perth has a Wetherspoons! Fills up on cheap beer which sets him up well for riding through 5 distilleries. Has a dram at each one (rude not to) and ends up in a ditch.

Disaster strikes! Rhodes is found dangling by the waistcoat as he gets snagged on a tree and his fancy robot bike goes whizzing off into the distance. Bell got lost in the rough. Both drop out. The rest of the pack head off for 9 days in the Scottish Highlands.

Gaston starts the week, putting in a healthy 52 miles. The Cairngorms are magnificent and have actual reindeer wandering about. Whipping past the Highland Folk Museum we find that its remit is “…to shelter homely ancient Highland things from destruction”, so we drop Dougal off for safekeeping. I only know Kingussie from Slumdog Millionaire, but apparently shinty is a thing and they are really good at it there. No boat in Boat of Garten. Curls up in a barrel at the Tomatin Distillery and calls it a day.

Judd takes the lead with a further 38 miles. Skirts the edge of Loch Ness, eyes peeled. Into Inverness, feeling underdressed for the Northern Meeting. Passes the Munlochy Clootie Well, where sick children are left by some rags in the woods to get better overnight… Stops for a dram in the sun outside of the Dalmore distillery.

Parkes takes his turn at the front with 77 miles. Laughs at the sign for Inchindown, amazed that it’s the site of the world’s longest echo. The oil rig graveyard is just weird. Still no Lamingtons in this Lamington, feel let down by all the lies. Cruises through Tain, namesake of perhaps the greatest record ever made. Glenmorangie leaves me warm inside. What’s left of Skelbo Castle looks cool. Good ruin country. Achiemore is wild and empty and magnificent. Stops by the roadside, might just stay here.

Christofidou appears out of nowhere, racing to the rescue and joining the pack with a much appreciated 3 miles. Nothing but fields and sheep and hairy cows as far as the eyes can see. Earns herself a paddle in the North Sea at Melvich beach.

Murphy takes over for the final straight, closing out the week with a thumping 82 miles. Surfing Thurso East looks cool…if you’re a puffin. Picks up speed (and a bottle for the road) at Scotland’s first and last distillery. No castle in Castletown. “Scotland’s most dismal town” pulls into sight! Murphy screams into John o’Groats, doing 40 miles of victory laps around the signpost before the wheels come off for one last time. Falls to the ground a happy man while the support crew fill him with Greggs Steak Bakes.

The world is a different place. We’re all adapting to a new way to work and live. Here's what we're doing.

It's at the heart of everything we do. Karyn Williams sheds more light on where we've come from and where we're going.

A beautiful scheme which successfully integrates contemporary design into a conservation setting.

Weathering the Covid storm and learning to dance in the rain

Across the property industry, 760 people took part, raising over £100,000 to help #EndYouthHomelessness.
We use cookies to ensure that we give you the best experience on our website.OkRead more