As 2017/’18 chair of Women in Property South West, Rachel hosted over 100 successful events, grew membership by 29% and established herself as a role model for women in the construction industry.

Back in the office, she is a director and applies her construction industry knowledge to her joint roles as head of business development and head of transport. An architect at heart, Rachel has been an outward facing personality for us since joining as a University of Bath student in 2000.

Rachel, what is the role of an architect to you?

The role has changed a lot even in my lifetime, from when I trained using pens and scratching out on tracing paper to the incredible digital environment we exist in now. It is an exciting time to be part of teams who can help shape our world. As influencers of the places we live and work, it is our role to ensure the spaces people inhabit are well designed and enjoyable.

Handing over my role at the Women in Property AGM in February 2018. Standing in front of everyone who has been an advocate of what I do has left me forever proud. Alongside my full time job, I voluntarily led the main committee in Bristol of 27 people, as well as sub committees across the South West. There are so many lovely testaments from people saying that I’ve made a difference to them.

Who is your biggest career influence?

My Dad, an electrician by trade, was my role model who inspired me to get into the industry. When I was two I climbed up a ladder to reach him on the roof of our house and ever since then he said I should be in construction.

Interesting fact that no one knows about you?

I’m passionate about steam trains! When I was younger, my grandad bought me some shares in West Somerset Railway and going on steam trains keeps alive my memory of him.

I’m also a strong believer in health and wellbeing. Yoga has been a love of mine for around 15 years. If I could, then I would spend my whole day upside down in a handstand.

Watched #Mars on #Netflix fascinating parallels drawn from scientific research in 2016 to a possible human habitation on the red planet in 2033 and beyond. Quite thought provoking with an episode on pandemics..... Worth viewing. 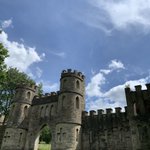 #sundayvibes walking @NTBathSkyline. Day5: 18,000 steps so far easily breaking my 10,000 for #QuaranTEN @LandAid 🚶🏻‍♀️ You can still sign up and sponsor here; https://t.co/qpalORQKnU #Goyourownway #endyouthhomelessness
Alex Bell@BrickitPro
If you can drag yourself to the bedroom window at 3am, you might see this #cometNEOWISE

Property Personality of the Year

Mentor of the Year

Women in Engineering and Construction Awards 2018

Women in Construction and Engineering Awards 2019

The strength of our relationships is what will get us through says Rachel Bell.

With your help, Rachel, Caroline, Robert, Graham and John raised £4,858 to help #EndYouthHomelessness.

Rachel Bell and Tristan Rhodes to join board of directors

"They are immensely talented, outstanding leaders and we're thrilled to welcome them to the board."

We're thrilled to announce that, from over 400 entries, all our nominations for the WICE awards have made it through.

Our extraordinary industry has something for everyone

People are at the heart of everything we do. Rachel Bell talks collaboration, learning and shaping future architecture.

This year, we're going all out. We're sending experts from regions across the UK.
We use cookies to ensure that we give you the best experience on our website.OkRead more