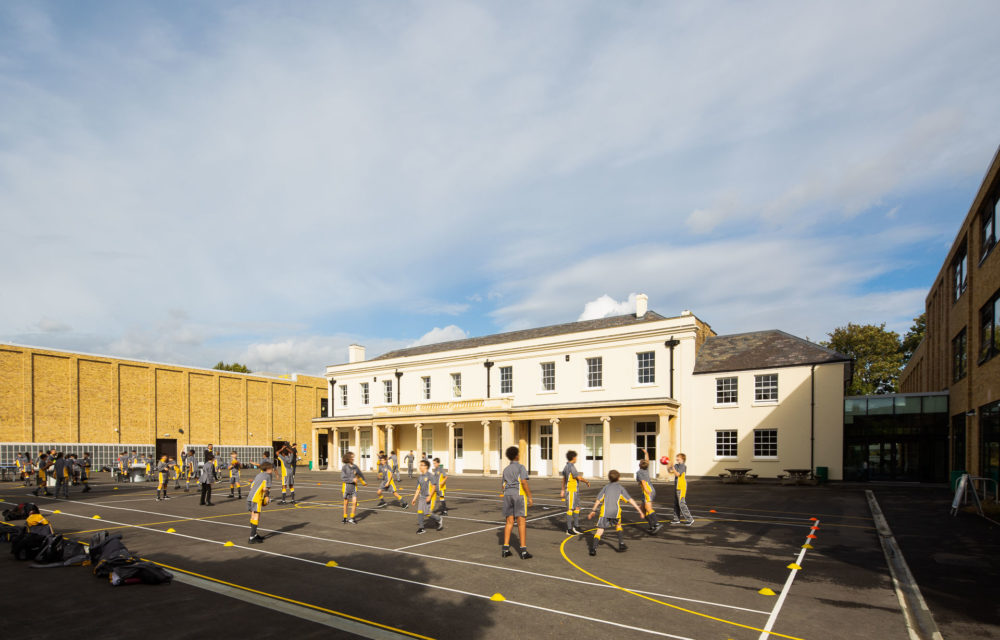 I have recently led two school projects that included the refurbishment and conversion of existing historic buildings which were to be integrated within a larger new school: Oasis Academy Temple Quarter in Bristol and the recently completed Ealing Fields High School in West London.

Ealing Fields High School involved a combination of substantial new build and the refurbishment of historic buildings to become an 840 place secondary school.

Our starting point was to sensitively assess the rabbit warren of existing buildings to identify which were most historically valuable, in best condition and most suitable for integration in a new school. This exercise concluded that only the Grade II listed manor house and former servants’ quarters were viable for retention.

Further analysis was then necessary to establish how the brief for a conventional secondary school could be mapped onto the floorplan of a 17th century manor, originally built for Charles II’s Chancellor of the Exchequer!

The balance between the demands of efficient reuse and sensitivity to significant historic assets is essential for a project’s success. However, the aspirations of various stakeholders do not always perfectly align.

A lounge where Queen Victoria once took tea was a prime example of a space earmarked by the funders for teaching. However, we felt the room, with its historic fabric and associations, was too significant to be included in the school’s area brief. Instead, the decision was made to restore the lounge, giving the school a parlour space bursting with character and history.

We were fortunate to have extensive, direct communication with the DfE project lead which enabled us to develop a bespoke design that evolved iteratively and sensibly in this way. This dialogue was critical to the success of the overall project.

As the demand for schools in densely populated urban areas inevitably increases, it is more likely that projects will be constrained in some form and require a degree of creative customisation.

Reuse of buildings, historic or otherwise, can answer part of this need and may bring benefits to a school’s character if appropriately incorporated. But it is essential to recognise that projects with unique constraints require a bespoke brief and creative solutions which are allowed to develop without rigidly adhering to the ‘one size fits all’ approach.

Craig Brown specialises in school design and was lead architect for the Ealing Fields High School project. If you’d like to find out more or discuss your own project, please get in touch.

Say hello to our sector leads

Homes for lockdown, homes for life

Architect, Francesca Johnson says our lockdown experiences can, and should, inform senior living designs for the better.

Is London up to the 2030 net-zero carbon challenge?

New Crematorium for Plymouth to start on site

A scheme which roots itself in the calmness of the surrounding landscape to provide the best possible experience for mourners.