Rob has been with the Cardiff studio since 2008 and now heads up the Residential team there. He recently qualified as a Passivhaus Designer too. 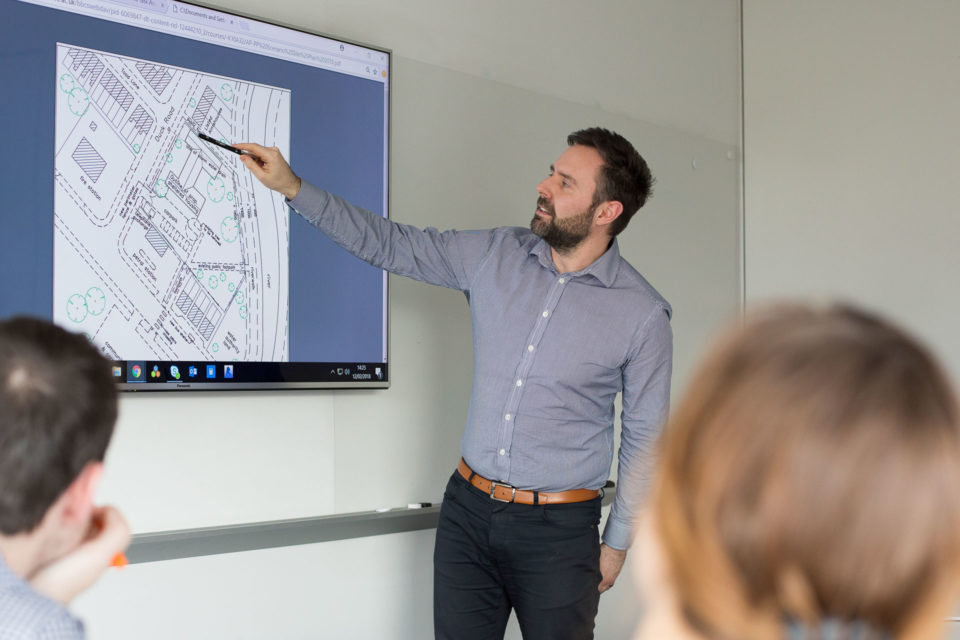 It is recognised as the leading standard in low energy building design worldwide. It’s underpinned by really good building physics and a quality assessment procedure which enables you to deliver buildings that perform as they are designed to. And that’s so important. Designers really need to upskill themselves to be able to deliver those levels of performance. It’s why I took the training, I wanted to push to the next level.

Did Treglown Court have any influence on your interest in sustainability?

Working in a building like Treglown Court, you can’t help but be influenced by it. I was fortunate to see it being constructed. I remember being on site when the glulam beams were being lifted into place – it was so impressive. You could tell straight away that it would be a delightful space. And now with the glulams exposed internally, you get a sense that you’re in a building that proudly wears its sustainability credentials. That inevitably rubs off on you in terms of design. It makes you more conscious of the materials you’re using and the spaces you’re creating.

How would you describe Treglown Court?

Treglown Court is quite a quirky building in appearance with lots of character. It was designed ten years ago to achieve BREEAM Outstanding. BREEAM is a holistic approach to sustainable design which drives you to look at materials. It’s been criticised recently as being a bit of a tick box exercise but here it’s delivered a building with a raft of great sustainable outcomes. And whilst we wanted a highly sustainable building, we also wanted a really pleasurable working environment that encourages good communication and collaboration. And we achieved that. The building’s success definitely reflects in peoples’ feelings towards it. With Covid-19 here, I think people genuinely miss it like an old friend.

There’s a real buzz in the office. We’ve got multi-disciplinary teams and a lot of exciting projects so there’s lots of communication and bouncing ideas around. And everyone has their own voice, no matter what level. I remember joining and really being encouraged to give my opinions, even as a pre-qualified architect. There’s a lot of respect for people’s individual interests and we’re really encouraged to pursue whatever motivates us.

Does the architecture encourage good communication?

Definitely. But it might also be down to the mix of personalities. We’ve got a really friendly bunch that seem to bounce off each other. But the communication doesn’t just happen by accident. It’s a lot of hard work from a few individuals who encourage lunchtime discussions and get togethers. We have one great session called ‘Devil in the detail’ where you share any issues you encounter on site. They can be quite fun and there are always different opinions on how to solve a situation. Those sorts of events are so useful and not just for the younger staff.

You’re currently undertaking a post-occupancy survey of Treglown Court, is that right?

Yes. The beauty of living and working in a project that you have designed is that you have access to lots of data. So I’m in the process of pulling together ten years of energy data to see how the building is performing. We’re hoping it will form a lessons learned piece and inform our future designs. It should be really useful, not just for us but, for the wider industry.

What have you learned so far?

We’ve learnt lots from Treglown Court, especially the importance of details. So here we’ve got a very high-performance fabric with very high insulation values but there are weak spots – joins and junctions which cause heat loss. If you drill into that detail and tackle the weak points, you can take a building to the next level.

They also say that you can’t design a zero-carbon building, you have to run one. And we’ve found some truth in that. We’re lucky in that we’ve got Anthony Walsh who takes a real keen interest in how the building is running on a day to day basis. You need people like that in your buildings to make them work as intended.

How much has sustainable design and technology changed in ten years?

Things have moved on a hell of a lot since we designed Treglown Court. For example, our biomass boiler was all the rage back then. Now things have changed and there are concerns about local-level pollution and questions about the sourcing of pellets. It’s very much the all-electric route now. However, one thing I am really pleased about is the time and effort we spent on getting the fabric of Treglown Court right. So, technology does change but the fabric is performing very well. It’s got U values of 0.1 and, even by today’s standard, that’s impressive.

What are you working on at the moment?

A residential development of 144 homes west of Swansea called Gwynfaen. It’s a joint venture between two South Wales housing Associations, Pobl Group and Coastal Group. It’s a really interesting project with innovation grant funding from the Welsh government. The majority of homes on the site will be zero carbon in operational energy terms. But not only that, we’re looking at the embodied carbon of the materials that are going into constructing these homes – I would argue that’s just as important as tackling the operational emissions. So all the homes will be built from sustainably sourced Welsh timber from local forests, manufactured locally to site, and then assembled as off-site cassette panels.

Absolutely. With Gwynfaen, we’re lucky in that we’ve got clients that have really driven the agenda on sustainability and challenged the design team to push the boundaries. And we’ve got a great team which has pulled out all the stops in getting this project designed and through planning. For example, no-one knew whether you could actually build 144 homes with Welsh timber. We didn’t know if there was enough available or if it was the right grade to build with. So there was a terrific amount of research required. We visited five or six timber frame manufacturers to check their capabilities. That’s unheard of in a normal housing project but we needed to go to that level of detail to make sure what we were proposing could be delivered. It was a really enlightening process and we’re still learning.

Last question, can you tell us what motivates you to push for sustainable design?

My daughter. What sort of world are we going to leave for our children? Given the fact that we are in the building industry which contributes so much to C02 emissions, you can’t help but feel a really strong sense of responsibility. It’s just about being a good citizen and trying to make the world a better place. And buildings have a large part to play in that. We need to decarbonise at such a rate. And it’s not about thinking about it now, it’s about doing it. So, my focus is to deliver buildings which perform as they say they do and can ultimately be part of a net zero world.

Be the first to hear from the next group of Inhabitants.